A bull named BOND must be caught now - before he runs 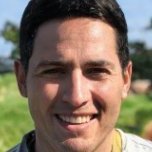 By Saenov,
September 5 in Cryptocurrencies